Currently at the special exhibition “ONE GOD – Abraham’s Legacy on the Nile” in the Berlin Bode-Museum two more than thousand years old bibles from the London British Library have been monitored in their glass cabinet by the ArtGuardian System.

These are firstly the “First Gaster-Bible“, (900 bis 1000 AD), one of the earliest Jewish illuminated manuscripts and secondly the Karaite Book of Exodus, (1005 AD) from Egypt. Both are loans from the British Library Board given.

These loans could be facilitated only using the ArtGuardian System. The British Library has set the precondition to be able to check the climate condition within the closed glass cabinet remotely. Using the ArtGuardian System the conservators responsible for the Bibles in London can check the climate conditions within the glass cabinet in Berlin in real-time, would be alarmed via mail immediately in case of any limit violation.

It is always a substantial challenge to move an extremely sensitive and in the same time very precious piece of artwork – although if the way to go is not very far and even if the movement happens actually within the own institution only but to another location.
Hamdi Beys „The Carpet Seller“ is one of those very sensitive and precious artworks. It shows the flourish antique trade of Istanbul with European tourists arising as the buyer – dressed with topee and parasol. It combines in a wonderful way keen humane power of observation and quiet humor with virtuoso surface treatment and passion for detail.
This painting is very precious because Osman Hamdi Bey was an outstanding artist. As a painter he is considered as the founder of a distinctive Turkish School, as archaeologist and museum founder he carried out pioneer work regarding the development of the archaeology in Turkey and the conservation of the antique culture heritage. In the meantime his paintings achieve rates of several million Euro on the art market.
Simultaneously this artwork is especially sensitive. The used canvas and the applied primer coat are very thin and so they react very sensitive to external influences such as fluctuations of the surrounding climate for example.
When Mariana Castillo Deball, Awardee of the Nationalgalerie 2013, curates her exhibition „Perergon“ she chose even this master piece, “The Carpet Seller” to be one of the crucial elements of her view at „Biography of Things “. At first glance this choice seems to be one of the more easy to realize parts of the exhibition. A painting of the Nationalgalerie, domiciled at the Alte Nationalgalerie, to be presented at another location of the Nationalgalerie, the Hamburger Bahnhof – Museum für Gegenwart. On closer consideration it becomes evident that this choice causes substantial challenges from the view point of the conservation science. A sensitive master piece was chosen to be presented in a non-conditioned exhibition area, the large hall of the Hamburger Bahnhof. Even in winter time, when due to the room heating the humidity adopts unavoidably dangerously low values.
Two measures have despite that enabled the presentation. An isolating „climate envelope“ equipped with preconditioned Silicagel-inlay designed and realized by the conservator in charge of the Alte Nationalgalerie and the new ArtGuardian System for permanent artwork climate monitoring. The climate envelope – a form of small show case – was together with the painting inserted into the ornamental frame. It has stabilized the micro climate for the painting at the conditions ruled at the Alte Nationalgalerie – 53 % humidity.
The ArtGuardian System offers online climate monitoring, temperature and humidity inside the envelope and in the close vicinity of the painting, to the conservators in charge, Kerstin Krainer and Johannes Noack. So it was possible to permanently control the effectiveness of the envelope and react on extreme low humidity. Based on the measurements a mobile moistener has be installed as the humidity in the exhibition hall was adopting values too low for the historically precious ornamental frame.
The exhibition ends on March 1 – the artwork has endured the difficult conditions and a further test under real conditions has demonstrated the suitability for daily use of the ArtGuardian System. 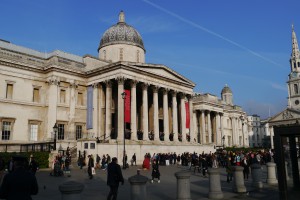 At the end of last year, the Museum Folkwang exhibition in Essen “Voyage Retour“ showcased 80 years of documented history in Lagos, Nigeria – a city that definitely has a difficult climate for sensitive works of art.

The extensive range of photographic pieces, including from Wolfgang Weber, Germaine Krull, Robert Lebeck, Rolf Gillhausen, Malick Sidibé and Pieter Hugo, afforded insight into changing times and contrasted colonial times with our current age of global capitalism. After Essen, the exhibition traveled to Lagos itself, where local artists brought their perspective to the show and the art was discussed directly at the site of the subject. However, the site in question is known for its extreme temperatures and high humidity, which posed a challenge for conservators.

Luckily, the company HALBE-Rahmen GmbH and the Fraunhofer-Gesellschaft provided a solution. By combining the ArtGuardian sensor system and the Protect Plus magnetic frame, an exhibition can now travel anywhere in the world – even places that have the most difficult climatic conditions.

Using the ArtGuardian system, an artwork can be monitored around the clock, including continuous recording of its state and the surrounding environmental conditions. The data can be accessed by Live connection in real time from anywhere. The solution allowed for the conservator in Europe to inquire the condition of a particular artwork in Africa within seconds whenever necessary.

The results of this pilot project are shown in the figure below, with the diagram charting the relative humidity, which is one of the biggest detrimental factors in artwork conservation, around and within the Protect Plus magnetic frame – and thus surrounding the artwork. Clearly, the Protect Plus magnetic frame, which comprises an innovative silica gel that controls humidity and a special enclosure system that protects the artwork from the surrounding atmosphere, was effective. Relative humidity within the enclosure remained almost constant at 50%, despite the extreme atmospheric conditions within the exhibition space.